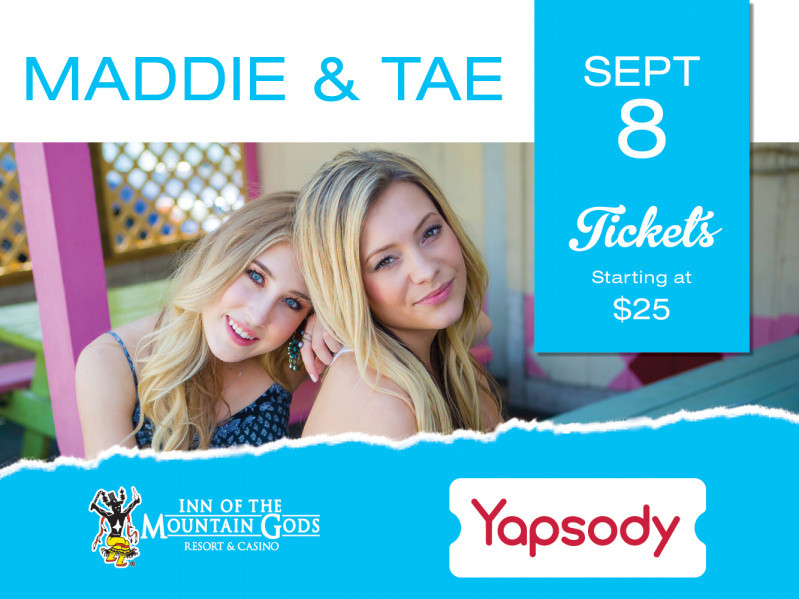 Maddie & Tae boldly introduced their debut single “Girl In A Country Song” shortly after signing with Dot Records. Featured on their debut album START HERE, of which they penned each of the eleven tracks, the PLATINUM-certified breakout hit soared atop the Country radio charts and made them only the third female duo to peak their debut single at #1 in the history of the Billboard Country singles chart.

The gender-flipping video garnered over 38 million views and scored the duo their first-ever award: CMA Video of the Year. The pair, from Texas and Oklahoma, respectively, also swept the 2016 Radio Disney Music Awards, winning both Favorite Country Artist and Favorite Country Song for GOLD-certified “Fly.” They have previously been nominated for ACM, CMT and CMA Awards.

Receiving critical acclaim from NPR, Entertainment Weekly, The Washington Post and Glamour, among others. Maddie & Tae have appeared on the Late Show with David Letterman, TODAY, The Tonight Show Starring Jimmy Fallon, Live! with Kelly and Michael and most recently on The Talk, where they performed a cleverly written tune about dealing with bullies called “Sierra.” Sharing their songs with fans on the road, Maddie & Tae conquered their first headlining START HERE TOUR last fall before joining Lee Brice’s LIFE OFF MY YEARS TOUR and most recently wrapping dates with Brad Paisley’s LIFE AMPLIFIED WORLD TOUR.

Don’t miss this duo as they take the stage at Inn of the Mountain Gods on September 8 at 8pm. Tickets start at just $25.

Minors Must be Accompanied by an Adult. All Ticket Sales are Final.